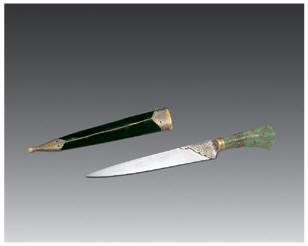 Most people rarely hear traces of Tanstan jade. Tracedstan refers to the Mughal Empire established in the 16th-18th centuries. The tracedstan jade is actually an Islam jade or jade. The Qing Dynasty was the heyday of Chinese jade craftsmanship. In addition to the traditional Chinese jade articles, the Qiandustan jade was also introduced and copied in the Qianlong Period. Qianlong pronounced his words in Tibetan and verbs, and personally verified the transcripts of traces of Durban.

"Today's skillfulness is the first to be traced to Durban." The records of Ji Xiaoyi's "Yuewei Thatched Cottage Notes" can be seen in its important position in the history of the jade of the Qing Dynasty, and it is highly valued by the imperial palace of the Qing Dynasty.

Due to its geographical relationship, the selection of materials for the traced standai jade wares is mostly Heyu jade and Yeerjiao hornblende jade in southern Xinjiang. The jade is fine, the texture is warm, and through the light, it can be seen that there are cotton or dotted inclusions inside. The tracerstan jade craftsmen like to use solid jade carvings, that is, a variety of colors, especially the use of sapphire, white jade or jasper, which is in stark contrast to the traditional Chinese jade carvings.

Because of the local climate and natural conditions, as well as the influence of customs and customs, the patterns on the traces of Dhotustani have a distinctly alien national color. Plant leaf pattern is the main decoration, flowers, grass, passion flower and clematis are the main.

During the reign of Emperor Qianlong of the Qing Dynasty, the House of Representatives set up a workshop dedicated to imitation of traces of Tsentuoyu, and Suzhou's special workshops also had imitations. These "Xi Fan Zao" jade devices did not follow the same pattern of copying trace dossue jade, but instead took advantage of its unique shape, smooth design, and thin-walled carcass, combined with the traditional methods of Chinese craftsmanship to create a jade article with Xifan style. . These Chinese and Western jades directly affect the style of Chinese jade. Most of the modern jade stoves are Chinese-style, and the decorative patterns are Western-style, just like the Chinese-Western combination of furniture. .

Traces of the Jade remains rare, and most of them are stored in the Taipei National Palace Museum, and a relatively small number of private collections are found. Affected by this, the scores on the auction market of Bentuoshen Jadeware can be described as stable and stable. However, there are also traces of traces of traces of jade in the market. If the products of the Qianlong dynasty were involved in the auction, the Tibetan collection still needs to have their eyes polished.

Details of our Leather Bracelets: